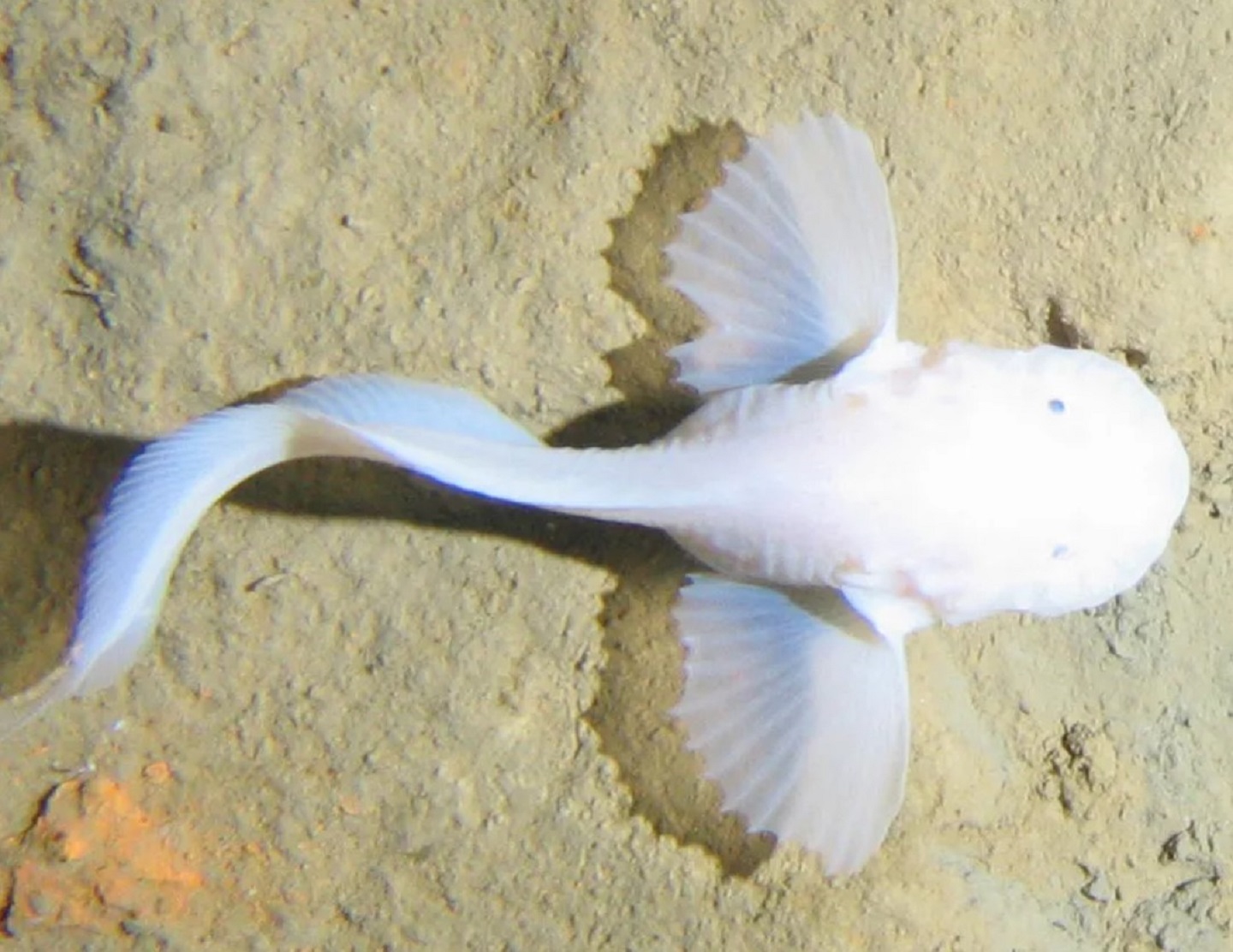 The snailfish that inspired the robot. Alan Jamieson, Author provided (No reuse)

The deepest regions of the oceans still remain one of the least explored areas on Earth, despite their considerable scientific interest and the richness of lifeforms inhabiting them.

Two reasons for this are the low temperatures and enormous pressures exerted at such depths, which require the exploration equipment be carefully shielded inside high-strength metal or ceramic chambers to withstand them. This makes deep-sea exploration vessels bulky, expensive and unwieldy, as well as difficult to design, manufacture and transport.

But a new small self-powered underwater robotic fish appears to offer an alternative. According to a recent paper, the robot was able to reach the deepest part of the Pacific Ocean – the Mariana Trench – at a depth of almost 11 km (6.8 miles).

The pressure there is more than a thousand times that on the surface of the sea. Yet various animals, including fish, are able to withstand this staggering pressure and have adapted to life in such adverse conditions. The morphology and skull structure of one of these marine organisms, the hadal snailfish, reportedly inspired the design of this remarkable robot swimmer.

The main breakthrough that enabled this significant achievement was a specially-designed compliant polymer body which deforms, without breaking, under high pressure. The team of researchers from Hangzhou in China were able to embed the delicate electronic components required for power, movement and control in a protective silicone matrix.

The electronic components were separated from each other, instead of being tightly packed together as is the usual practice, to make them more resilient to the pressure, similar to the skull bones of the snailfish.

The robot also looks like the snailfish, with an elongated body and tail, as well as two large side fins made of thin silicone. The fins flap to propel the small robot, which measures only 22cm (8.7 inches) in length with a wingspan of 28cm.

The fins are not operated by rigid motors, but by soft artificial muscles. The muscles contain dielectric elastomers – a class of smart materials which contract when electrical voltage is applied to create large movements.

Disk-shaped dielectric elastomer elements create the fin flapping motion that propels the robot, reaching speeds of up to about half a body-length per second (around 0.2 km/h), even at significant depths.

However, this type of actuators – the parts that make a machine move – requires very high voltage. A compact high-voltage amplifier multiplies the lithium-ion battery voltage more than a thousand times to meet this requirement, while an infrared receiver allows remote control of the robot. The soft fins and soft actuators were carefully designed to survive and perform well at the low temperatures and high pressures of the deep-sea environment.

The team performed extensive computational studies and laboratory testing of the propulsion methodology and of how the electronics cope under extreme pressures. Then, they conducted free-swimming field tests, first in a deep lake, then at the South China Sea at depths of more than 3km, before deploying it in the Mariana Trench.

In the Mariana field tests, the robot was mounted on a deep-sea lander, so wasn’t allowed to swim freely. But, it was able to maintain its flapping motion, as recorded by the cameras of the lander, for 45 minutes at a depth of 10,900 metres.

This deep-sea swimmer is an example of a new generation of robots inspired by living organisms, both animals and plants. They are built exploiting the advantages of compliant materials like silicone and other polymers, gels or even textiles.

These robots can bend, yield and adapt in response to forces from their environment, so are inherently safer to work next to humans compared to the typical rigid industrial robots. On the other hand, their design, actuation, sensing and control can pose significant challenges, which lie at the core of their scientific and technological interest.

There is currently intense interdisciplinary research activity in this new area, called soft robotics, leading to exciting innovative advances for a host of related applications, ranging from agriculture to medicine and space. The Harvard Octobot is an example of this class of robots, which appears to have been, among others, a source of inspiration for the design and the technologies employed in this deep-sea robot.

The current version of the deep-sea swimmer appears to be relatively slow, not very easy to manoeuvre, and possibly not able to withstand the strong underwater currents which would disturb its course while attempting to follow a desired path. However, its designers already seem to have plans for further improvements that will make it more manoeuvrable, more efficient and smarter.

Despite any shortcomings, we should not underestimate the robotic design principles and technological advances that led to such a dramatic demonstration.