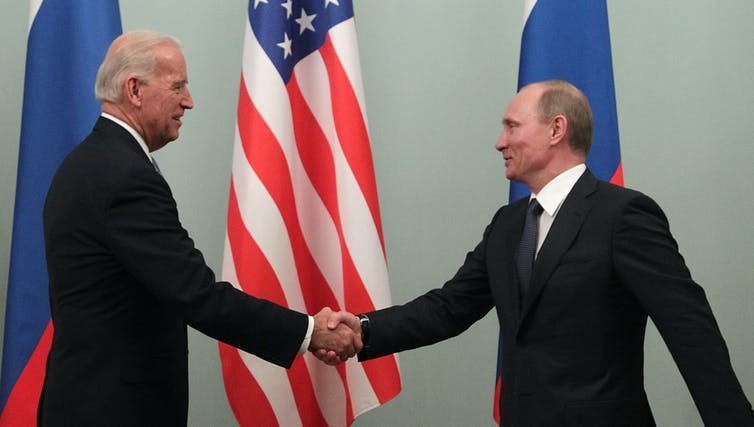 Joe Biden and Vladimir Putin meeting in 2011, during the Obama presidency. Maxim Shipenkov/EPA-EFE

No one is expecting any major breakthroughs from US president Joe Biden’s first meeting since his election with Russian president Vladimir Putin.

Senior officials on both sides have been careful to keep expectations for the Geneva summit low. According to the White House, the Biden administration intends to use the summit to set out its foreign policy intentions and capabilities, with the specific aim of improving strategic stability and strengthening nuclear arms control. The Russians also place strategic stability on their agenda, along with COVID-19 and settling regional conflicts.

The caution from both Washington and Moscow is not surprising. Relations between the US and Russia have been under considerable strain since 2014, when the US led an international campaign to introduce economic sanctions on Russia following Moscow’s annexation of Crimea and its intervention in the conflict in eastern Ukraine.

Moscow resents the imposition of sanctions and is deeply suspicious of western support for its own opposition figures, such as Alexei Navalny, now serving a prison sentence in Russia. Biden’s recent description of Russia’s treatment of Navalny as “unfair” will be regarded by Putin as further evidence of America trying to dictate how Russia handles its internal affairs.

Washington regards Russia as a troublemaker that refuses to play by the rules of diplomacy and uses its intelligence services to undermine the US and its allies, by interfering in American elections or poisoning former Russian spies living in the west.

But if there are unlikely to be tangible results coming out of this summit, then why are the two leaders meeting at all? Part of the answer may lie in the symbolic significance of the event, for both sides.

For Biden, the meeting is an opportunity to send signals to several audiences simultaneously. Meeting with Putin only after attending summits with the G7 (which expelled Russia after it annexed Crimea in 2014) and NATO reaffirms America’s commitment to multilateralism and to its transatlantic allies.

This is very different from the “America First” approach and the foreign policy turbulence of the Trump administration. Making an effort to improve the relationship with Russia is important for the Biden administration, but not as important as doing business with America’s partners.

Holding a summit with Putin so early in his presidency also invites comparisons between Biden’s approach to Russia and that of his predecessor. Trump preferred to meet with Putin privately, without US notetakers leaving no official record of the discussions and generating speculation about what he might have agreed. In contrast to Barack Obama, Trump also exhibited an almost reverent attitude towards Putin.

Although Biden is a new president, his long career in the US Senate and his eight years as Obama’s vice president mean he is the veteran of many high-level international meetings. He is unlikely to break protocol or depart from the script by offering a new reset with Russia along the lines of the optimistic but ultimately unsuccessful proposal he made back in 2009.

But while Putin will neither be expecting nor offering any dramatic changes to the US-Russia relationship, this summit is nevertheless valuable for him. First and foremost, it is a clear demonstration that Russia continues to be important on the international stage.

Recent statements by western officials, such as Britain’s head of MI6 Richard Moore, describing Russia as a declining power have clearly stung Putin’s pride. As Putin remarked at a recent press conference, if Russia is a country in decline, then why is the west so concerned about what Moscow does?

Putin places a high value on demonstrations of respect for Russia from the leaders of other countries, especially the US. A key reason for Putin’s continued popularity among many Russians is the perception that he is responsible for a resurgence of Russia’s prestige internationally after Moscow’s humiliating loss of power and status in the 1990s.

A one-on-one meeting with the US president just months after taking office is an implicit endorsement of Putin’s position that the really significant problems facing the world cannot be resolved if Russia is absent from the top table. When the two leaders spoke on the telephone shortly after Biden’s inauguration, Putin remarked that the US and Russia have a special responsibility for maintaining global security and stability.

To turn this statement into something more substantial than a soundbite, Putin needs this summit go beyond a de facto recognition of Russia’s great power and status, as welcome as that is. There is certainly the potential for this meeting to lay the foundations for future cooperation on specific issues where Russia’s ability to offer something concrete matches America’s desire to make progress.

Arms control is a good place to start. The two leaders could build on their agreement reached in January to extend New START, which limits the numbers of strategic nuclear weapons that each country can deploy and is the last remaining arms control treaty between the US and Russia.

The fight against COVID is another potential area for collaboration. Although both the US and Russia have had their struggles with the pandemic, Russia’s eagerness to export its Sputnik vaccine could dovetail nicely with the Biden administration’s emphasis on the importance of adopting a global approach to tackling the virus.

Considering the long list of issues that Biden and Putin disagree on, it is perhaps wise to keep expectations for the summit low. There are, nevertheless, areas where the two leaders have enough in common to justify some very cautious optimism about the future of US-Russia relations.