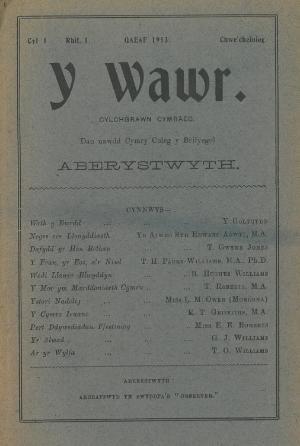 The first issue of Y Wawr appeared in the winter of 1913 at the end of the long Edwardian summer.  In the editorial of that issue, the editor says that ‘the main objective of the magazine is to strengthen the union between the people of Wales and the students of the University of Wales’ and that it was ‘the product of Nationalism awakening in the hearts of students of the University College in Aberystwyth’. The students were aware that they were in a privileged position; they had been given an opportunity to receive an education ‘through the hard work of the ordinary people’ who had established the university and felt it their ‘duty to repay them for their labours’.