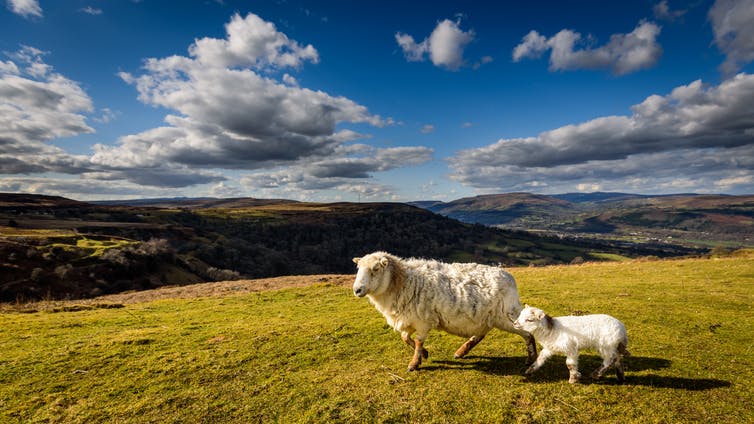 Following incidents like the European horsemeat scandal and Rana Plaza building collapse, consumers have begun to demand more visibility and transparency within supply chains. But how easy is it to untangle where products like supermarket burgers or high street clothing actually come from?

While campaigns like Fashion Revolution have successfully called on some major fashion brands to reveal aspects of their supply chains, it is often less obvious where the raw materials – the cotton or wool going into these textiles – have been produced.

Our research team has been trying to understand how globalisation affects where things like food and textiles come from, by looking at the ways in which rural places are brought into global trading and cultural networks. Our work has focused on the town of Newtown, in mid Wales. During the 19th century, Newtown lay at the heart of a global boom in the Welsh woollen flannel industry. At its peak, goods manufactured there, and branded and marketed as from Newtown, were sold across the UK and around the world – enabled by the institutions and structures of the British Empire.

By the turn of the 20th century, however, the Welsh flannel industry had fallen into terminal decline, facing competition from the better connected, larger and more modern textile factories of northern England and America. Yet the hills of mid Wales are still alive today with the sound of bleating – in 2017, Wales produced over 10m sheep – although the animals now are used mostly for lamb chops, with wool largely a by-product of the meat production industry.

These days, the local place branding of wool has become a less significant aspect of its value. Local production is now one site in a global network of goods such as clothing, carpets, knitwear, bedding and insulation. The national branding of industry organisation British Wool has instead taken over.

Although its role has changed, Newtown is still part of this worldwide industry. The majority of Welsh wool passes through what is the UK’s second largest wool grading depot in the town, operated by the British Wool Marketing Board (BWMB). The BWMB provides its 45,000 member farmers with collective sales and bargaining power within the international wool market. It operates an auction house in Bradford where graded wool lots (of similar type, quality and characteristics) combined from different farms are sold to registered buyers electronically. These are mostly wool merchants who trade internationally and supply manufacturers.

The lots are then shipped to processing facilities, some in the UK, the EU, or China, depending on the end user. There, an intensive cleaning process called scouring takes place. Lower labour costs and different environmental regulations have resulted in a significant shift in this primary processing towards China over the past decade. Only two commercial scouring facilities are still operating in the UK, both in Bradford. This means that British-grown wool may first go to China for cleaning and processing (carding and spinning, for example) before returning to the UK as yarn for use by carpet manufacturers.

China now buys over 30% of UK wool exports, in addition to buying around 75% of all Australian wool and 25% of New Zealand wool. The majority of British wool exported to China will be finer, higher-value grades for onwards sale to textile manufacturers around the world, potentially returning to Newtown in the form of woollen hiking socks bought online. Coarser textured wool from the hill and mountain sheep breeds found in mid Wales will largely be used for carpet manufacture in the UK and Europe.

What this all means is that that four or five companies and several countries may be involved in turning wool from Newtown into a finished commodity. Contrast this with 150 years ago, when wool was “grown”, processed and turned into a product within a few square miles.

The complexity of these relations means that it is virtually impossible to trace the provenance of Newtown or even Welsh wool into a specific product within the global wool market. By contrast, the New Zealand wool industry has sought to add value through the promotion of farm-level traceability for its premium merino products.

A similar project has been launched to develop and market pure Welsh wool of regional provenance is being developed by the Cambrian Mountains rural development initiative in mid Wales too, however. Reaffirming the importance of place, Cambrian Mountains Wool is an attempt to substantially re-ground the stretched and distanced elements of the woollen industry within the rural landscape of mid Wales. It seeks to “rekindle the historic links between local sheep farmers, wool processors, designers, makers and retailers”.

By taking Newtown as a starting point, we can see how changes in global economic relations – labour, technology, infrastructure, policy and regulations, supply and demand – mean that sites of production, processing and consumption have become stretched across increasingly greater distances. As a result, the nature of the commodity itself has also changed from a place-specific product (“Newtown flannel”) to a nationally branded and marketed product (“British wool”) to a ubiquitous “everywhere” product. Hiding the components, the labour, the organisation, the structures, and the places of the things we consume has almost become a defining central feature of contemporary globalisation.