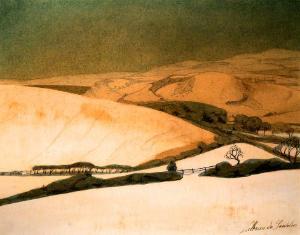 In September 1914, a few weeks after the start of the First World War, the sisters Gwendoline and Margaret Davies, Llandinam, sent their friend Thomas Jones, Major Burdon-Evans, solicitor and the family’s business manager along with Fabrice Polderman, Professor of Philology at the University of Ghent, to Belgium to arrange for a number of Belgium artists could be brought to Wales away from the threat of the war. By 3 October they has assembled 91 artists, composers and their families and succeeded in escaping across the Channel on ‘the last but one boat to get away’. 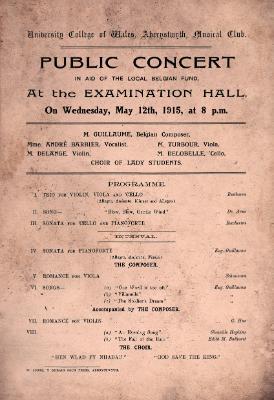 Some of the families settled in the Aberystwyth area and were supported for the duration of the war by the generosity of the Davies family, a family who had for many years been generous supporters of Aberystwyth University. In 1916 Gwendoline and Margaret Davies volunteered to work for the French Red Cross in a canteen and transit camp for injured soldiers near Troyes. Before leaving Wales, Gwendoline wrote to the Registrar of Aberystwyth University saying that she and her sister were ‘very keen on helping Aberystwyth College’ and that she would like to establish something quickly in case they did ‘not return’ from France*. Over the following years the College received anonymously from the sisters sums that would be worth well over five million pounds today.

We are very grateful to Moira Vincentelli for permitting us to include her article, The Davies Family and Belgian Refugee Artists and Musicians in Wales, that was originally published in the National Library of Wales Journal, Volume 22, Number 2, Winter 1981.