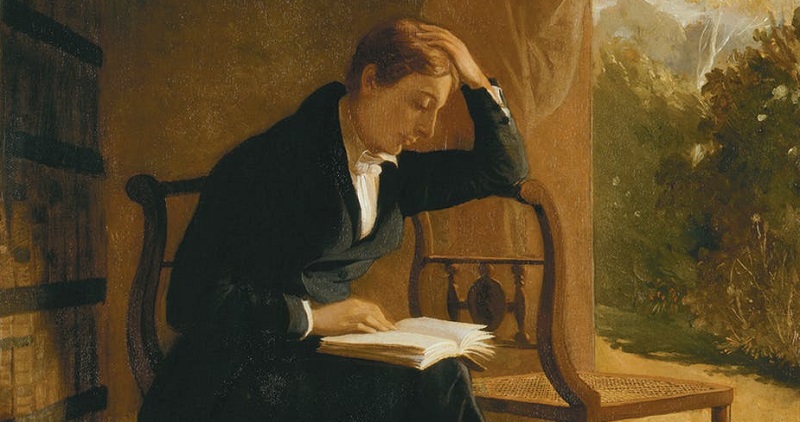 John Keats’s ode To Autumn is one of the best-loved poems in the English language. Composed during a walk to St Giles’s Hill, Winchester, on September 19 1819, it depicts an apparently idyllic scene of harvest home, where drowsy, contented reapers “spare the next swath” beneath the “maturing sun”.

The atmosphere of calm finality and mellow ease has comforted generations of readers, and To Autumn is often anthologised as a poem of acceptance of death. But, until now, we may have been missing one of its most pressing themes: surveillance.

The opening of the second stanza appears to be a straightforward allusion to personified autumn: “Who hath not seen thee oft amid thy store?” But that negative is odd, and hints at a more troubling side to the famous poem. Keats, a London boy, was walking in Winchester’s rural environs to get away from it all – but rather than describing a peaceful stroll, the poem seems to form an anxious meditation on the impossibility of privacy.

We might assume mass surveillance is a modern phenomenon, but “surveillance” is a Romantic word, first introduced to English readers in 1799. It acquired a chilling sub-entry in 1816 in Charles James’s Military Dictionary: the condition of “existing under the eye of the police”.

But why would Keats have been thinking about spies in the St Giles cornfield? Rewind six days to September 13, 1819, when Henry “Orator” Hunt was entering London to stand trial for treason.

The political reformer had been arrested in Manchester for speaking at the Peterloo Massacre. Hunt was welcomed to the capital by a crowd of 300,000, with Keats, whose literary circle included political radicals, among those lining the streets to catch a glimpse of the government’s greatest bugbear.

London was on lock down. The Bank of England had closed its doors, the entrance to Mansion House was packed with constables and the artillery was on standby. Spies mingled with the Orator’s supporters, listening out for murmurs of popular uprising.

These were dangerous times, which To Autumn perhaps acknowledges with its opening allusion to close conspiracy and loading (weapons):

Close bosom-friend of the maturing sun

Conspiring with him how to load and bless

Usually a garrulous letter writer, Keats waited until September 18 – the day before he wrote his ode – to describe Hunt’s procession to his brother and sister-in-law, and then in only the sketchiest terms. He notes the huge numbers but carefully distances himself from the cheering crowds, claiming it had taken him all day to feel “among men”.

Keats is uncharacteristically circumspect, almost as if he feared his correspondence might be intercepted – and perhaps for good reason.

Keats posted two letters during Hunt’s pageant, to his fiancé Fanny Brawne, and to his friend Charles Brown. The first letter arrived without mishap, but Brown’s went missing for 11 days. Later, Keats told him he believed the letter “had been stopped from curiosity” – that is, read by third parties.

The truth was more mundane: Keats had got Brown’s address wrong, and the missive duly turned up on September 24. The letter has since been lost, and we can only guess at its contents, but it’s not inconceivable that, in the midst of Hunt’s maelstrom, Keats had been more candid about his support for the “hero of Peterloo”.

What we do know is that when Keats was writing his great ode on September 19, he suspected his private correspondence, posted during one of the most controversial political marches of the age, was in the hands of government spies.

Keats’s creative antennae were already attuned to the issue of surveillance before this incident. His long poem Lamia, finished that same September, describes its heroine being tracked through the streets of Corinth by “most curious” spies (compare the phrase Keats used to refer to his missing letter: “stopped from curiosity”). That poem opens with a queasy scene in which Hermes transforms Lamia from serpent to woman. The price is information: Lamia agrees to give up the location of a nymph’s “secret bed” to the priapic god.

A rosy-hued Winchester cornfield might seem a long way from buzzing Corinth, or the violent scenes at Peterloo, or indeed the convulsed capital itself. But the field’s apparent calm is actually a fault line in Keats’s supposedly idyllic poem: the reapers, whose hooks lie idle, ought to be working flat out.

Landowners often grumbled about the laziness of Hampshire’s (poorly paid) casual labourers. It could be that Keats’s ode unwittingly drops the delinquent reapers in it, the poem’s lens giving them away at their “secret bed” (to recall Lamia’s betrayal of the sleeping nymph).

To Autumn is full of directed acts of invigilation: looking (patiently), watching (hours by hours), and seeking abroad (Keats’s first draft was more ominous: “whoever seeks for thee”). All the while those poor labourers were oblivious to the fact that their furtive nap was being observed, and carefully recorded.

Because let’s not forget, Keats is describing actual workers, real people whose slacking off he reports as unthinkingly as we might share our own peers’ political views or locations on social media. As casually as a Google car might capture a moonlighting worker up a ladder outside someone’s house.

When we take all this into account, To Autumn begins to read as an all-seeing optic, internalising the very surveillance culture Keats worried about, and itself becoming a spy transcript.

The ode is an early example of how art and literature process the psychological impacts of intrusive supervision. Written (in Keats’s mind) under surveillance, and bearing the marks of that imaginative pressure, the poem offers itself as a powerful document of what happens to communities, to social groups – to sociability itself – when watching, informing and being informed on become the norms of human interaction.