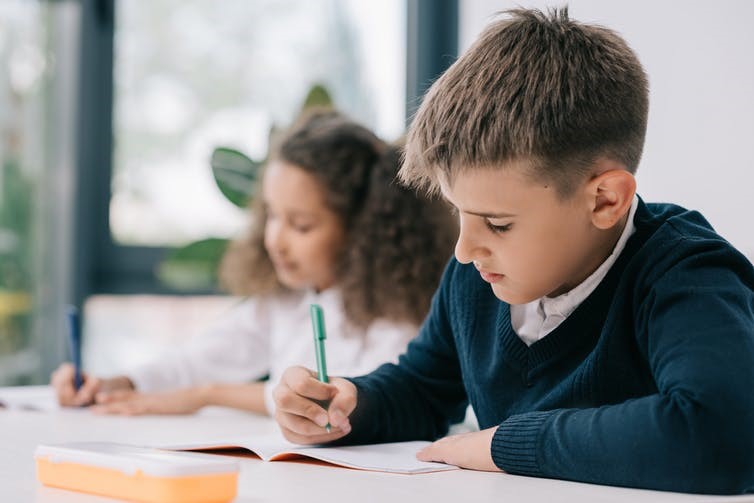 Bilingualism can result in changes in the brains of children, potentially offering increased problem-solving skills. Pupils who are competent in two or more languages may have academic advantages over monolingual children.

In Wales, children have the opportunity to become bilingual by attending Welsh-medium primary and secondary schools, where the sole or main language of instruction is Welsh.

However, parents who do not speak Welsh but send their children to be educated in the language have reported finding home schooling challenging during the lockdown. Some may even be considering moving their children to English schools in order to be better able to support them at home – perhaps because of fears of future lockdowns or quarantines.

Nevertheless, where they can, parents should keep the faith. The benefits of a bilingual education are huge, and turning their backs on Welsh-medium education might be detrimental to increasing the number of young Welsh speakers.

Welsh-medium education allows pupils to achieve fluency in both Welsh and English to a greater extent than they can achieve by learning Welsh in an English-medium school. The Welsh government has a target of a million Welsh speakers by 2050, and school education has an important role to play in achieving this.

My past research explored the Welsh-language competence of primary school pupils who spoke English at home and attended Welsh-medium schools. I found that aspects of their communicative competence in the Welsh language were similar to a control group of Welsh native speakers. Both groups made the same developmental grammatical “errors”, although the English-speaking group made these errors more often.

Welsh-medium schools are successful in English language examination results as well as in other academic subjects. In 2019, three out of the ten top secondary schools in Wales were Welsh-medium.

Immersion schooling was initiated in Canada in the 1960s, and research showed that children achieved higher levels of bilingualism when they were taught in a minority language. Studies on immersion education throughout the world have backed up these results.

The value of languages

Increasing numbers of parents around the world are giving their children access to education not only in two languages but in three or more languages. Where a minority language exists in the community, trilingual education is gaining in popularity. Pupils receive their education in the minority language and the majority language of the region as well as taking lessons in a foreign language.

One example is the Basque country, where pupils receive their education in Euskara (the Basque language) and Castilian (Spanish) and also learn English as a foreign language.

In 2012, Scotland began introducing two additional languages at primary schools, while England made teaching a foreign language part of the national curriculum in primary schools in 2014.

Enabling children to become bilingual through Welsh-medium education ensures that, when they are older, they can better compete with bilingual and multilingual people from the UK and European countries. Businesses in the past have had to rely on EU nationals to fill posts where foreign language skills are required.

Learning an additional language is easier for people who are bilingual as they already have two languages at their disposal. This enables bilingual children to make connections between the languages they already know and the foreign language. Further on in life, studies have shown that bilingualism may delay dementia and Alzheimer’s.

Now is the time for parents to continue to place their faith in bilingual education for the sake of their children’s futures.