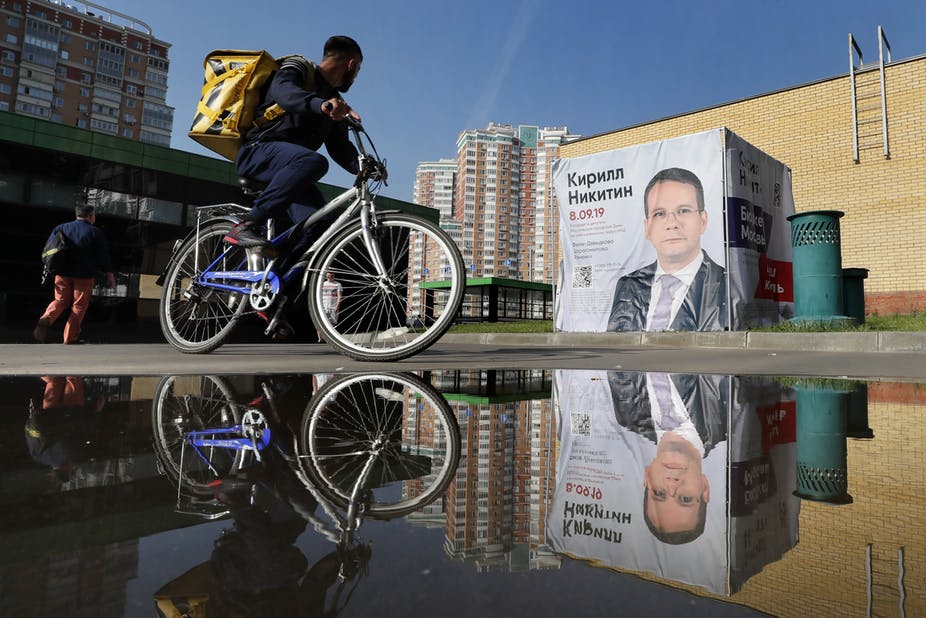 Many opposition candidates were banned from elections to Moscow’s Duma. Yuri Kochetkov/EPA

After weeks of controversy and protests, local elections in Russia left Vladmir Putin’s political party, United Russia, in an embarrassing position. Although long-regarded as the party of power, United Russia barely managed to hold on to its majority on Moscow’s city council and lost a third of its seats.

Despite heavy-handed tactics by the Central Election Commission to keep opposition candidates off the ballot and credible allegations of election fraud, including those made by the independent Russian election monitoring organisation Golos, United Russia now controls 25 of the 45 seats in Moscow’s city council. In the previous election in 2014 it had won 28 seats outright, and backed ten other independents.

The outcome in Moscow is only part of the overall picture. Voters went to the polls on September 8 to elect 16 regional governors and hundreds of local officials in municipal elections across Russia. United Russia candidates won all the gubernatorial races and many of the municipal ones. But while much of the everyday politics will, on the surface, remain the same after polling day, the significance of these elections lies in what they reveal about just how unpopular the party of power – and, by extension, Putin’s regime itself – is becoming.

Previously, United Russia candidates enjoyed significant advantages over their political opponents. This included the calculation by voters that an official backed by the Kremlin might be able to direct resources towards addressing the problems in their districts.

Now, however, there are concrete signs that United Russia is regarded as a toxic brand – at least in the capital. Not a single one of its own candidates for the Moscow city council stood under the United Russia name in the elections. Instead, they all stood as independents, although they continued to receive financial support from organisations linked to United Russia.

The results also demonstrate that bread-and-butter issues are no longer a strong point for the Kremlin. Although Putin presided over an impressive period of prosperity during his first two terms as president, since he returned to the post in 2012 the Russian economy has suffered a prolonged downturn. The standard of living has declined significantly for many of Putin’s traditional supporters, such as working class people, the middle aged and pensioners, and has been hit further by the state’s move to increase both taxes and the retirement age. The first indications are emerging in the Moscow city council race that some of these voters are looking for alternatives to the status quo.

The election campaign showed that the unofficial opposition in Russia is ready to take advantage of popular disillusionment with the state. An excellent example of this was the tactical voting website launched by Alexei Navalny, one of the leading opposition figures in Russia. For years Navalny has been chipping away at the credibility of senior elected officials with his mesmerising and fact-filled anti-corruption YouTube videos. In preparation for the September elections, Navalny and his team of researchers invited voters dissatisfied with United Russia to consult the “Smart Vote” website to find out which candidate in their district had the best chance of defeating the candidate representing – or linked to – United Russia.

And while much of the drama to place genuinely independent and opposition candidates on the ballot played out in Moscow, the clever use of social media ensured that the news spread well beyond the capital. One opposition candidate who was barred from running in the Moscow city council elections, Lyubov Sobol, nevertheless gained widespread sympathy and admiration for her articulate statements, her lengthy hunger strike and her courage in the face of repeated harassment by the security services. If nothing else, the summer and autumn of 2019 has provided Russia with some new and compelling personalities for the political opposition.

So while these elections are unlikely to lead to rapid or dramatic political change in Russia, they do put down some important markers for the future. Parliamentary elections are scheduled for 2021 and the next presidential race should take place in 2024. Putin cannot, according to the constitution, stand again. Unlike the opposition, United Russia seems to have few, if any, new ideas and little that is positive to offer to voters, now that economic prosperity is no longer a promise it can credibly make. Unless the regime embarks upon a sustained crackdown, which is not impossible but comes with its own risks, the next time Russia goes to the polls, United Russia may come away with more than just a bloody nose.